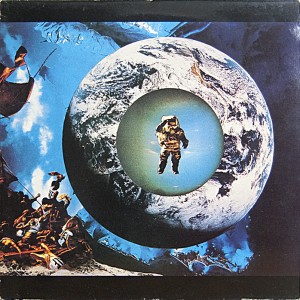 This album was intended to be The Orb’s debut and was worked on by Alex Patterson and Jimmy Cauty.  However the two fell out, so Cauty removed Patterson’s contributions, finished it himself and released it as Space.  It is of course well known what happened to Alex Patterson..

It works as a companion piece to the KLF’s groundbreaking Chill Out (which I’ll post another time), although it was nowhere near as well known, probably because it wasn’t released under the KLF moniker.  At the time ambient house was widely regarded as a joke, a typical KLF prank.  After all, how could you possible have dance music without rhythm?  Listening to these albums quickly shows that it wasn’t a joke, they are both as good as anything else the KLF did; in fact I’d argue Chill Out was their best.  Of course the idea of ambient music is an old one; Brian Eno is usually regarded as a pioneer in that area with his album Music For Airports, but you can trace it back further than that, for example with early Tangerine Dream, and even further with Satie’s Vexations.  All that was new was who it was being made by and the audience.

Space is very sparse.  It has long silent gaps, and when there is sound, there’s not much of it.  But like Chill Out it’s beautifully constructed and on its own terms it works well.   The cover gives a tracklisting which is just the names of the planets in order of their distance from the sun, just like Holst used for his Planets suite.  However the CD has only one long track, so it’s up to the listener to figure out what’s what.

The album was never officially re-pressed so became insanely rare very quickly.  Inevitably it was widely bootlegged; in fact most extant copies are bootlegs.  This however is a rip of the real thing; the original CD issue.  Whether it’s different to the bootlegs I have no idea, although bootleggers aren’t exactly renowned for being worried about sound quality.