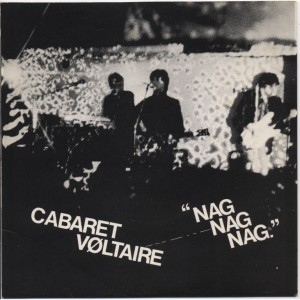 This is the Cabs second single, ripped from an original 7″.  Nag Nag Nag is relentlessly lo-fi, both in terms of the gear they used and the recording, but it works really well.  I’m not enough of a techie to say much about it, but to my ears it sounds like the most primitive drum machine imaginable, although I guess in 1979 there was nothing else available, with other backing from crude electronics which sound to me very home made.  The vocals are similarly lo-fi – they sound as though they’re coming through a megaphone with flat batteries.   In a way it reminds me of watching the original series of Star Trek – a vision of the future which never came to pass.  It’s a deeply weird record, but Nag Nag Nag is also a great tune.

The B side, as the title suggests is 5 minutes of pointless noodling, made bearable by more retro sounds and, surprisingly the copious vinyl crackle which is largely absent on the A side.