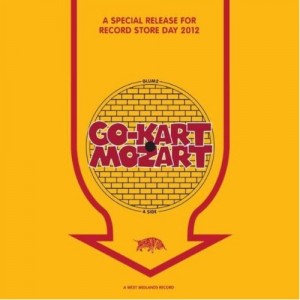 Another post about the eccentric ex Felt frontman, Lawrence, this time his third band, Go-Kart Mozart.  When Lawrence disbanded Felt, he started making music in a very 70s kitsch style kicking off with Denim’s first album Back In Denim.  Since then, he’s been ploughing a very similar furrow with mixed results.  I really think it’s time he moved on, but Lawrence’s artistic motivations are always hard to fathom.

This is a 7″ single which appeared at Record Store Day last year, so is already deleted.  The A side is lifted from the Lawrence biopic Lawrence Of Belgravia and is a cover of New World In The Morning, originally recorded by whistling housewives’ favourite of the 70s, Roger Whittaker.   It’s easy to laugh at Roger Whittaker, but this is actually a pretty good song and it works well with Lawrence’s 70s stylings.  The B side is nuts even by Lawrence’s standards; it takes longer to say the title Gizmos, Gadgets, Unrock, Electric Guitar Clock Tick Tock than it does to play the track which clocks in at only 1 minute.  Actually very short songs are something Lawrence has explored before to good effect – pop music should use them more.  No repetition and verse/chorus/verse structures to bore you – just a quick romp through and end.  What this song is about is anyone’s guess, but Lawrence always had a knack for making strings of nonsense sound good.