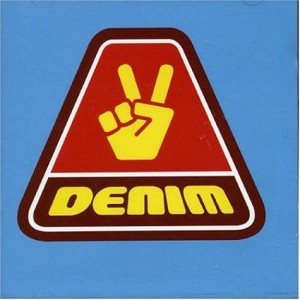 I’m surprised to be posting this.  There’s been a Cherry Red re-issue and a good deal of interest in Lawrence recently so I thought this would be kept available, but it seems not.

If you’re not familiar with Denim, it’s the band formed by Felt’s Lawrence after he disbanded Felt.  I remember being very excited about it, and I bought it the day it came out.  What I heard astonished me; the whole album is a homage to the 70s, both stylistically and lyrically and couldn’t have been a bigger departure from his work with Felt.  Remember that the 70s were not cool at all in 1992.  Most people were old enough to remember the decade and were more than a little embarrassed about it, at least the pre-punk bit which is what Lawrence is so interested in here.  Of course being Lawrence it’s brilliantly done – only he could have got away with singing about the Osmonds to a thumping glitter beat in 1992.

Predictably though, it didn’t sell well.  Lawrence is often described as being both ahead of his time, but also outside it, and this album is a good example of exactly that.  The revival of 70s culture was some years off, but when it came, it certainly wasn’t done like this.  It alienated Felt fans, and was too, well, weird for everyone else.  Perhaps being on a major for the first time in Lawrence’s career didn’t help.

It started a rather tragic journey for Lawrence, at least that’s how it seemed to me.   Everything he recorded from that moment was a variation on this same theme.  It was as though he knew it was brilliant and was going to keep releasing more of the stuff until people got it.  The problem of course is that people never did get it, and the quality of what he was doing, while always worth listening to, was never as good as this first attempt.

The album was apparently produced by John Leckie to begin with but Lawrence proved impossible to work with and he pulled out.  He said Lawrence was the most difficult musician he had ever encountered – and for someone with a CV as long as Leckie’s, that’s saying something.

This album is one of popular music’s forgotten bonkers classics.  It is the work of a madman, but a very talented madman.

Felt: The Final Resting Of The Ark

Denim: Back In Denim