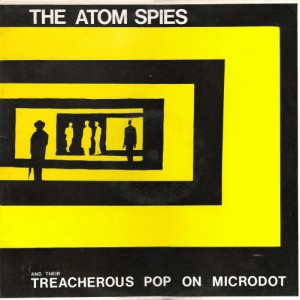 Another long forgotten Birmingham band today: the short lived Atom Spies who made only this one single, although I seem to remember that they also recorded a Peel session.  However they do have a claim to fame, which is that the band’s Chandra Blunt (Geddit?) went on to become Steve Chandrasonic of Asian Dub Foundation.

The Atom Spies always came across very much as a work in progress.  As their name and the title of this single suggest they were into the whole 1960s spy look, and they were often to be seen mincing around Birmingham in their sharp 60s suits.  The look worked well, and they had some pretty inventive material to go with it, but in those days their ability to play didn’t quite match up to their ambition.  Live they got away with it – I remember seeing them at Aston Triangle and at Peacocks supporting Pigbros and liking them, but the sound on this single is pretty thin – it was obviously recorded on the cheap and the artwork is similar.  However the material is really good and the whole 60s spy chic paranoia is pretty effective.  It’s a shame they never developed the idea, but I’ve always been fond of Asian Dub Foundation, so it’s not like their talent went to waste.  Anyway, for all its limitations I really like this single, and it turns out to be quite valuable, I guess because of the Asian Dub Foundation connection.