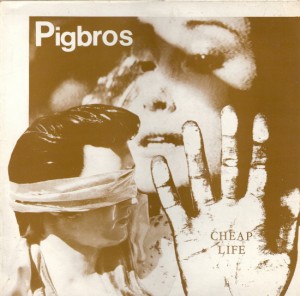 In the mid 80s it seemed like I saw Pigbros play every week.  They were local and they were good, and seeing bands (unlike buying records) was cheap back then.  Often they’d be playing with Mighty Mighty, whose BBC sessions I posted a while ago, although Pigbros were an altogether darker prospect than their jangly buddies.

They were very much a part of the Birmingham music scene – Nic Beale had been in The Nightingales, Fuzz Townsend, the drummer, who I first became aware of as a busker drumming on an old tin bath which became part of his drumkit in Pigbros, later joined Pop Will Eat Itself (he was wasted there I thought, but I guess it was fun and paid the bills), Svor Naan went by various aliases and was in The Cravats, and Jonathan Cooke – sorry, no idea.

This track was really powerful live and sounds pretty good here, although I guess they didn’t have the cash to create such a full sound in the studio.  Looking back, they split before they really reached their potential; they were certainly one of the more creative outfits on the local circuit.