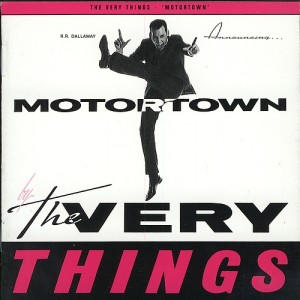 The Very Things described themselves as Dadaists, which I guess they were but it’s not a helpful guide to what they sounded like.  The problem is that they didn’t really sound like anyone else.  There’s a Cramps style interest in 1950s b movie sci-fi kitcsh, a bit of music hall, some motown (as the name of this mini album suggests) and some mid 80s indie guitar.  That all sounds like a bit of a car crash, but they made some fine records, this being one of them.

They must also be the best thing ever to come out of Redditch, a godforsaken new town just outside Birmingham, which maybe inspired the motortown thing.  An alien landing there could be forgiven for thinking it’s populated by cars and the weird two legged creatures are some sort of parasite they have to endure.