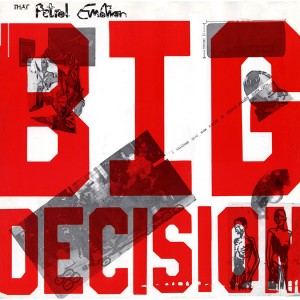 That Petrol Emotion rose from the ashes of the mighty Undertones, but had little in common with them.  They were darkly political with a killer line in rock guitar riffs.  This was their major label debut (I’ll post their indie singles another time) and almost grazed the charts – although it deserved to be massive.  The extended version on the A side has the sort of pointless embellishments major labels thought the punters were looking for, but the 7″ version on the B side doesn’t bother with that and concentrates on what makes Big Decision a great track (apart from a very short and very silly rap as the track ends).

I don’t usually buy vinyl from this era – if I didn’t get it back in the day I don’t bother, but I was in the excellent Power Records in Bilbao a couple of weeks back and it caught my eye.  I’m mighty glad I bought it, but the 7″ would have been better I think.