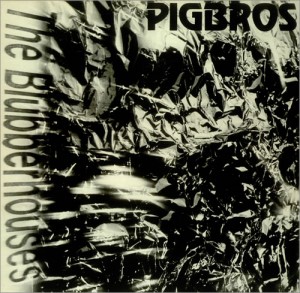 Another Vinyl Drip release and another debut EP, this time from Brum’s Pigbros who I’ve featured before.  Like Cheap Life there’s some great material here and it’s well played, but it’s a bit let down by the production which doesn’t capture the power they had live.  However it’s not hard to see through that limitation and see this for the inventive debut it was.  There’s a dark gothy feel to much of it – a sinister guitar sound, lyrics often with a slightly subversive political edge and some great drumming.

This EP is notable for the one obvious recorded appearance of drummer Fuzz Townsend’s trademark tin bath on the track Excessive.  Before Pigbros he was often to be seen busking with it, especially in the piss filled pedestrian underpasses near Birmingham fruit and veg market, but here it’s been incorporated into his kit.  As Pigbros neared the end of their career the tin bath had started to disintegrate under the assault from Fuzz’s sticks.  Maybe that was why they split up?