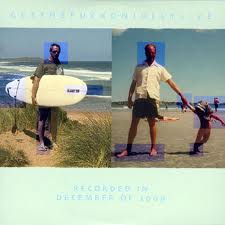 This is a very rare (500 copies) tour only album, which is, as the title suggests a live version of the Get On Jolly EP, although it’s a lot longer than the studio version.  It’s unlike anything else he recorded, being almost ambient in character in that it meanders along with no obvious sense of purpose until the last track, where things get a bit more conventional.  Don’t let that description put you off though, this is a beautiful piece of work.  The guitarist is Mick Turner, better known for his work with the Dirty Three and it’s the interplay between his inspired playing and Will Oldhams’s vocals which really make this album shine.

These two work together reasonably regularly, most recently a couple of months back on a rather fine vinyl only single, available here.