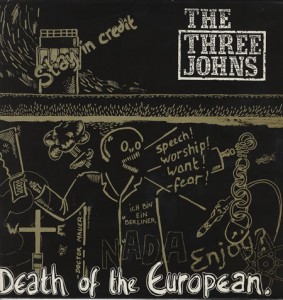 Today’s post is a journey into somewhat darker territory than yesterday’s jaunty Robert Lloyd single.  The Three Johns have a more gothy sound than I usually go for, but this is a great song which Peel played quite a bit.  According to Wikipedia it was also an NME single of the week – and deservedly so.  The sound on this 7″ single is decidedly murky.  Whether that’s deliberate or a duff recording I have no idea, but it really works with this material I think.   The sound is also made unusual by the use of a drum machine which is rarely effective with a guitar band I think, but here it adds to the atmosphere created by the murky sound.