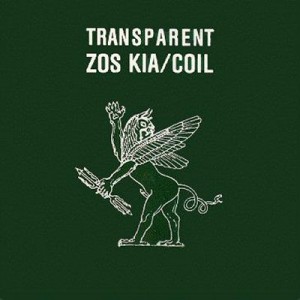 This is probably the most difficult listen of anything I’ve posted so far, being closer to performance art than it is to music.  It was recorded when Coil was a side project for John Balance and Peter Christopherson when they were still with Throbbing Gristle, here working with John Gosling (Zos Kia) and an unknown female vocalist.

I find this an almost unbearable listen, not because it isn’t really music in any conventional sense of the word, but because it’s deeply unsettling.  This was a characteristic of much of Coil’s music and is partly why I like them so much, but here the intensity, and the lack of light relief in the form of music makes it rather an ordeal.  I suspect that it also suffers from the absence of visuals, but I wasn’t at any of these performances, so I’m guessing.

The track Rape (originally Violation) I found to be completely unlistenable, but I guess a track on such a subject should be unlistenable.  If you’re into Coil it’s interesting to hear the seeds of what they’d later become but it’s the sort of thing you probably won’t play more than once.

This was a request from “Music Lover”.  Hope you enjoy it!

Coil: Musick To Play In The Dark, Volume 2