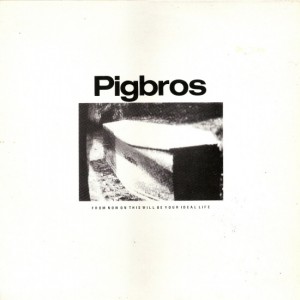 This is Birmingham band Pigbros’s only album, released at the tail end of their short career.  It was, as I recall entirely ignored and I don’t think they sold many copies.  I guess they’d pretty much reached the end of the line by the time it came out and they didn’t promote it.  In fact even though I was a regular at their gigs, I was barely aware that this existed and bought it second hand some time after the event in Selectadisc in Nottingham.

It’s like much of their output – some great songs, well performed with interesting lyrics, let down by ropey production and a murky sound.  I guess those things cost money and I doubt they had much of it.  It’s a shame because their live sound was great – I’d love to find a bootleg, but I think I’ll be waiting a long time.  No sign of them jumping on the indie reunion bandwagon like so many of the other bands I used to see back then either.

Despite those limitations, this is a great album.  One of the tracks (Cheap Life) has appeared here before, but this is a slightly different version.  It remains a stand-out, but I also love much of the rest, especially The Way Things Currently Are.  The guitar playing is much funkier than you’d expect from a bunch of brummy indiepopsters (maybe they’d been listening to ACR?) and Fuzz Townsend’s muscular and inventive drumming backs it all up very nicely.  Live the occasional appearance of Svor Naan’s rudimentary sax playing worked well, with a sinister bottom-of-a-well sound, but here it just sounds a bit lame.

For me this is a much more enjoyable listen if you pay attention to the detail.  When the overall sound isn’t brilliant, concentrate maybe on the guitar work or the drumming – if you do it suddenly works much better and you wonder how they failed to make the album sound much better than it does.

Further listening? Ha, don’t make me laugh.  Away from this blog I doubt you’ll find anything.  I’ll gradually post the rest of their output – I have everything they did except a flexi.