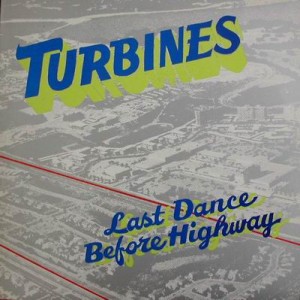 It don’t mean a thang if it ain’t got that twang, as Peel used to say before he played this band, or indeed anyone else who’d been overdosing on Duane Eddy.  This album has the most spectacularly twangy guitar sound of anything I own, and it’s really only that which makes this album such a great listen.  The material is decent rock n roll, mostly originals but with a couple of covers (Highway 51 was also covered by Dylan on his first album), but it’s the amazing guitar work which elevates this above the ordinary.

I know nothing at all about the Turbines, and this is all I have by them.  However a bit of googling turned up a weird co-incidence.  The album is produced by Fred Gianelli, who went on to make this single with Psychic TV.  I think it’s him on the cover too.  Don’t hold that against this album though – it’s properly good.