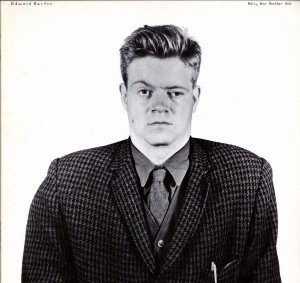 I’m rather fond of Edward Barton as a songwriter and also as an artist.  He’s featured here before as the writer of the classic It’s A Fine Day by Jane, and because of his self-curated tribute album, Edward Not Edward.  Here he’s in his more challenging guise of performer on a four song EP.  The songwriting is (mostly) as good as ever but these performances are not easy to listen to.

Telephone Box is a bittersweet, whimsical tale of a naive guy who mistakes a peep show for a phone box and falls in love with the stripper within.  Knob Gob is, well, I’m sure you can figure that one out for yourself, but our hero ends up with a broken back as a result of his efforts.  I’m not sure what the point is of I Slap My Belly, but the harrowing last track about his dead brother is very clear.

I think his difficult performances are worth persevering with, but my other half stomped out muttering about yet more shit records when I was playing this.  You’ll probably agree with her, but if you’re up for a challenge you could give it a go.  He’s something of a cult figure these days, so maybe you’ll earn some cool points from having heard this.