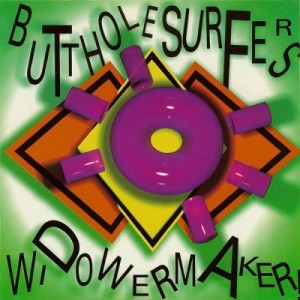 A vinyl rip at last!  This is an old one done before I had my current system, but it still sounds pretty good.

This EP came out in 1992, round about the same time as Piouhgd, when the band’s uncompromising weirdness, especially during their live shows had started to diminish.   They were panned for it of course, and it’s certainly true that compared to their landmark Locust Abortion Technician from 1987, this EP was a bit of a disappointment.

20 years down the line though it stands up pretty well.  It’s not as groundbreaking as their earlier work, but it’s a pretty good slab of psychedelic punk worth of 15 minutes of anyone’s life.

This is ripped from the UK vinyl issue on the achingly cool (back then) Blast First! label, which for reasons unknown is a 10″, unlike the US 12″ issue.  It also came out as a CD.

Further listening?  Well for me Locust Abortion Technician and Hairway To Steven catch the band at their peak.  Both are startlingly inventive and defy categorisation, but are also listenable unlike the chaos of their earlier stuff.  Get them from those delightful tax evaders at Amazon if you really must, but preferably at a proper record shop.  There are also loads of free (low quality) MP3s on their web site.