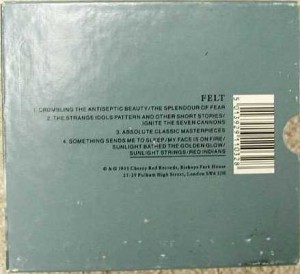 There’s been a resurgence of interest in Felt lately, partly because they were brilliant, but also because of the Lawrence biopic Lawrence Of Belgravia.  Lawrence, for the uninitiated was Felt’s brilliantly eccentric frontman, writer, and and svengali-like presence.  The film is well made, but because I never saw Felt live, or Lawrence in any other capacity for that matter, I found the whole experience hard to take.  It’s not just that Felt’s music is beautiful, although it is, it’s that Lawrence’s keen, even overdeveloped sense of aesthetics is stamped all over everything they did, so to see him in the film painfully emaciated, wearing a baseball cap he’s barely taken off for the last decade was difficult to take.  The man himself did a Q&A session afterwards, but his tragic presence and thick Brummy accent meant I could hardly bear to stay in the room, never mind ask him a question.

Cherry Red are doing a belated re-issue of Felt’s back catalogue; particularly welcome is the later Creation stuff which disappeared when Alan McGee closed the label down. I’m not into posting commercially available music at the best of times, much less when the musician in question is more-or-less destitute, so the 10 albums and 10 singles he delivered as promised in 10 years will remain on my hard drive, for my ears only. However Cherry Red haven’t been as thorough as they might have been with Felt – they’ve done the ten albums and a few compilations, but that misses a few bits and pieces which are well worth having. Felt justifies one of those lavish boxed sets people like me tend to buy, but no sign of that yet.

So, in the meantime, here’s a bit of a curio. In 1993 Cherry Red issued a boxed set of all Felt’s albums for the label, imaginatively titled Box. It came with a short bonus disc of non-album tracks. Box was deleted long ago and is now quite rare. As far as I can tell, none of the tracks have been re-issued, so here it is.

Further listening: well obviously you should buy everything Cherry Red have re-issued, but if you don’t want that much Felt, Ignite The Seven Cannons is a favourite, and I have a particular soft spot for Poem Of The River which is worth getting just for the wonderfully uplifting Riding On The Equator.  Felt also worked well as a singles band, so any of the compilations are worth a go, especially Stains On A Decade which is the only one covering all the labels they recorded for.