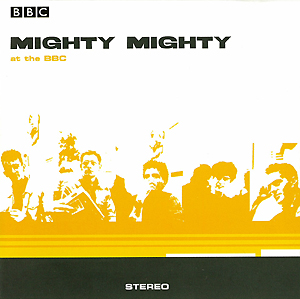 Back in the 80s I had a phase when I was into jangly indiepop.  There’s a lot to be said for simple music with a decent tune to put a smile on your face, and Mighty Mighty certainly delivered on that score during their short career.  Being a local (to me) band I saw them, maybe 20 or 30 times, so this album brings back good memories of those years.   It’s easy to assume that bands like Mighty Mighty didn’t play particularly well, but by the end they were actually a pretty slick outfit which this album shows.

While they were fairly successful for an indie band of the time, they became disillusioned by a lack of mainstream recognition and split in 1988, just after their only album Sharks was released.

More than 20 years after they split, they’re perhaps best remembered for contributing a track (Law) to the legendary NME C86 compilation cassette, a defining moment for UK indie music.  By the late 90s the Japanese had latched on to Mighty Mighty at a time when they were long forgotten at home which led to a flurry of re-issues from Vinyl Japan.  The band seemed to be more baffled by this than anyone.

Cherry Red have just released a 2 CD retrospective of everything they released in the UK, so I’ve had to rethink my original plan to post their album Sharks here.  Instead, we have the Vinyl Japan BBC Sessions album which is more or less impossible to find now. The performances and sound are less polished than the officially released versions, but it’s still classy indiepop.

The band have also issued their “lost” second album which I haven’t heard, but since it was recorded at a time when they were just getting better and better, I’m sure it’s great.