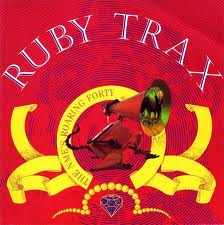 A move into rather more mainstream territory than usual for this post.  Ruby Trax was put together in 1992 to celebrate the 40th anniversary of the NME by getting 40 (mostly) indie luminaries of the day to cover No 1 singles.  It’s undoubtedly ambitious, but the overwhelming impression is of artists who really couldn’t be bothered but felt obliged to contribute to keep the music journos happy.  I’ve posted it not because of it’s artistic merit – there’s not much of that on display, but because of it’s long drawn out bizarreness.  Bizarreness is good.

In musical terms it’s worth it for the poignant cover of Suicide Is Painless by the Manics, three years before the disappearance of Richie Edwards, but other than that it’s mostly of interest to music geeks with completeist tendencies like me.  There are simply too many great bands here not to own it, regardless of how good (or not) it is.

If it has any appeal, maybe it’s the prospect of hearing bands you love making colossal errors of judgment (Billy Bragg doing disco anyone?), or just dashing something off without any real thought at all.  The Fall’s cover of Legends Of Xanadu ranks, I think as one of their worst efforts, but it was voted no. 5 in Peels’ festive fifty that year.  Is there something in it that I’ve missed?  Or maybe the bizarreness of it appealed.   The usually reliable Fatima Mansions cover the excerable Everything I Do I Do It For You.  At the time of course I was so heartily sick of the song that even the thought of it induced waves of nausea which maybe is why they chose to do it.  It’s hard to figure out why they slowed it down so much though, but I guess that’s the problem with the whole album, no-one thought much about anything at all.

Some of it is decent enough.  Suede were wonderful in 1992, and their version of Brass In Pocket while lazy works pretty well.  St Etienne’s Stranger In Paradise is hardly world shattering, but is a solid effort.

I think I should single out Ride for particular criticism.  All they manage to show by covering Kraftwerk’s The Model is a startling lack of musical knowledge.  There are certain artists you don’t cover (Al Green and Jeff Buckey for example) because their recordings are so definitive, any attempt to follow them leaves you with a lot of egg on your face.  Kraftwerk fit that category – only the fictional Señor Coconut’s bizarre/hilarious calypso versions really pass muster.  An exception is Big Black’s wonderful cover of The Model on their Songs About Fucking LP, and it’s that track which made Ride’s task impossible.  Ride were a good, maybe even great guitar band, but the song had already been put on the shelf for guitar bands by Steve Albini.  And of course no-one, especially not a guitar band, would try to sound like Kraftwerk….  surely no-one’s that daft….  Well it turns out, Ride were that daft.

As usual I’ve ignored the triple disc format of this and ripped it as one big lump of 40 tracks.  Here’s a tracklisting:

Wonder Stuff, The – Coz I Luv You
Billy Bragg – When Will I See You Again?
Jesus And Mary Chain, The – Little Red Rooster
Mission, The – Atomic
Fatima Mansions, The – (Everything I Do) I Do It For You
St Etienne* – Stranger In Paradise
Wedding Present, The – Cumberland Gap
Aztec Camera / Andy Fairweather-Low – (If Paradise Is) Half As Nice
Dannii Minogue – Show You The Way To Go
Welfare Heroine – Where Do You Go To My Lovely?
Blue Aeroplanes, The – Bad Moon Rising
Senseless Things – Apache
Teenage Fanclub – Mr Tambourine Man
Ruby Trax Part 2
Carter USM* – Another Brick In The Wall
Blur – Maggie May
Tears For Fears – Ashes To Ashes
House Of Love, The – Rock Your Baby
Frank And Walters, The – I’m A Believer
EMF – Shaddap You Face
Suede – Brass In Pocket
Tori Amos – Ring My Bell
Kingmaker – Lady Madonna
Marc Almond – Like A Prayer
Farm, The – Don’t You Want Me?
Ned’s Atomic Dustbin – I’ve Never Been To Me
Boy George – My Sweet Lord
Ruby Trax Part 3
Jesus Jones – Voodoo Chile
Bob Geldof – Sunny Afternoon
Johnny Marr & Billy Duffy – The Good, The Bad And The Ugly
Cud – Down Down
Fall, The – Legend Of Xanadu
Sinead O’Connor* – Secret Love
World Party – World Without Love
Inspiral Carpets – Tainted Love
Elektric Music – Baby Come Back
Ride – The Model
Vic Reeves – Vienna
Tin Machine – Go Now
Curve – I Feel Love
Manic Street Preachers – Suicide Is Painless