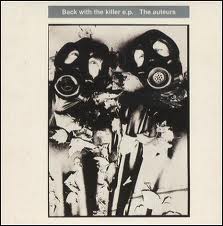 This is mostly of interest to me because it was produced by Steve Albini, although the man himself prefers the term “recorded”.  That aside, The Auteurs were an interesting outfit, rather darker than the usual guitar based indie stuff around at the time, as the title suggests.  Main man Luke Haines was always curiously uncomfortable with fronting such a band and was always at pains to distance himself from his peers.  It’s easy to dismiss that as wishful thinking on his part, but the discomfort comes across on this EP and makes it a pleasingly edgy listen.

The title track was taken from their album After Murder Park (see the theme emerging here) but the other three are exclusives.   Don’t think though that they’re rejects.  Well, maybe they were but it’s a consistently strong EP.  Maybe I should get the album…