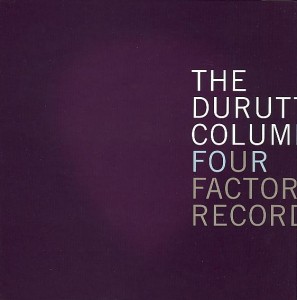 Discogs (This link is for the whole box, but only disc 5 is presented here.)

Over at the consistently excellent Everything Starts With An A there have been a three wonderful Durutti Column posts recently, which reminded me to post some of mine. His back catalogue is vast and largely unavailable, so I’m spoilt for choice. Actually I haven’t got around to figuring out what is still available, so I’ve started with something I know definately isn’t.

In 2009 Kooky re-issued the first four factory albums and included two bonus discs. This is the first of them and consists of demos and studio out-takes from the same period, i.e. 1978 – 1981. The sound quality is a bit variable – the home demos are a bit rough, whereas the studio recordings are great, but everything is perfectly listenable, and essential if you’re into this period of his work. Many fans say that LC is his best work, so outtakes from the same period are worth a listen. In that sense there are no surprises here – the disc sounds exactly as you’d expect.

The boxed set is a bit odd. It comes in a huge box, but the CDs just rattle around in slip cases along with album artwork and a handful of interviews printed on square card. Only 4 years after the event it’s already deleted and selling for silly money. Since Vini himself is broke and illness seems to have brought an untimely end to his playing career, it seems odd that he’s not able to make much needed money from sales of his back catalogue.  So, if you enjoy this CD, consider buying something from his web site. In an earlier post I recommended Vini Reilly; today’s recommendation is his highly personal tribute to Factory boss Tony Wilson, Paean To Wilson.  The vinyl edition looks particularly yummy – unfortunately I only have it on CD.

A Witness: One Foot In The Groove